In this post (and video!) I will share the highlights of a talk I gave recently discussing social media and professionalism, specifically how to protect your patients, your profession, and you. We’re all very familiar with the pitfalls of using social media professionally. We read stories online of physicians, nurses, and other healthcare providers being fired or disciplined for comments that they’ve made on social media that put patient safety and privacy at risk.

The American Academy of Ophthalmology recently published an advisory opinion talking about social media and professionalism, in which they gave several recommendations on best practices and how physicians, and particularly, ophthalmologists can use social media, in a way that is professional and protects patient privacy.

This is a picture of Austin Chiang, MD.  Dr. Chiang recently started the #VerifyHealthcare campaign in which he encouraged physicians and other healthcare providers to be transparent in their qualifications so that others that may be following and reading their content could be informed that they are experts and that they can trust the information that is coming from them. The Academy encourages us to state our qualifications and our competence in the things we are discussing online.

The Academy also encourages us to be honest and have integrity in our communications with the public. Imagine a vitreoretinal surgeon posting an ad that claims he is, “America’s #1 Refractive Retinal Surgeon,” and that he has a 20/20 vision guarantee, and that we can “count on Dr. So-and-So’s fingers for perfect vision.” Now clearly these claims are a little bit disingenuous and may mislead the public, and for that purpose the Academy is encouraging us to NOT have ads such as this one, but to be honest in the things that we are using in our advertisements and our marketing with the public.

We’re also encouraged to state our conflicts of interests when we’re maybe discussing things in social media posts, or on our blogs, or so forth of which we may be conflicted. A recent article published in the hematology-oncology literature looked at Twitter accounts of those hematology-oncologists that that have conflicts of interests and that tweet about drugs with which they are conflicted financially. They found that a very, very small percentage of those individuals actually state their conflicts. We should also be very careful to maintain patient confidentiality. 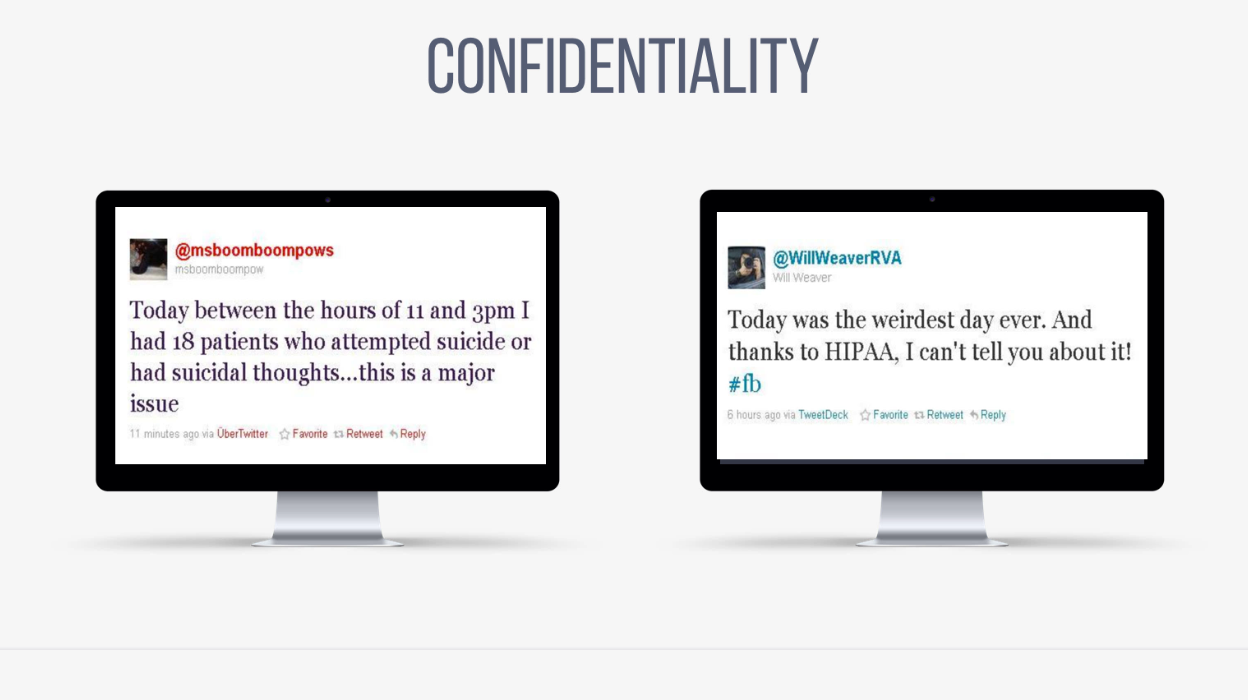 This is an example of a tweet in which the individual said, “Today between the hours of 11 and 3 PM I had 18 patients who attempted suicide or had suicidal thoughts…this is a major issue.” Now clearly this is a major issue, but this individual needs to be careful about not giving so much information – that perhaps the patients, and the families of those patients that they saw in the emergency room, or in the clinic that they could then identify that they were an individual that was being discussed here.

Keep in mind, this individual was not giving the patient’s names, their date of birth and those sorts of things, but this is a little bit of a grey area, when maybe this was not the best thing to be tweeting about this type of a topic. This is maybe a better example. This individual said, “Today was the weirdest day ever. And thanks to HIPAA, I can’t tell you about it!” When you’re posting on social media, you need to just run that tweet or that post through your mental filter two or three extra times to be sure – ‘am I saying something I shouldn’t?’ and if you think that you may be, then you need to delete that tweet, forget about it, and move on – because we don’t want to put any of our patient’s confidentiality at risk.

Here are a few examples.

This is Jesse Berry, MD a fantastic ocular oncologist (and friend, hence why I’m ok calling her Jesse) in Southern California. On Jesse’s Instagram page (@_moda_md), she posts some wonderful photos of her patients. 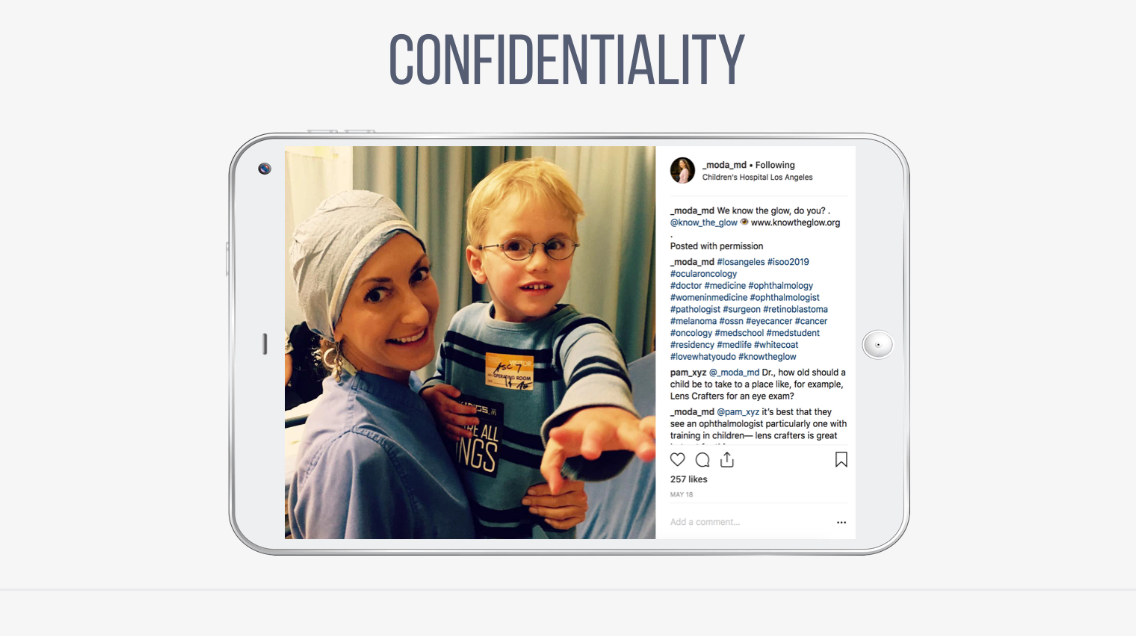 What I like so much about this post from Jesse is that you can see, about three lines down from the top right that she says, “Posted with permission.” When I see this post, I immediately think, ‘uhh, yikes, that’s a patient!’ but then, when I see, “Posted with permission,” I already trust Jesse, and I know that her posts are fantastic and she very much appreciates HIPAA, but I also appreciate that she states that these photos are posted with permission, because then I know that that family is aware, and this patient is aware of what’s happening. This is another example from one of Jesse’s recent Instagram posts. 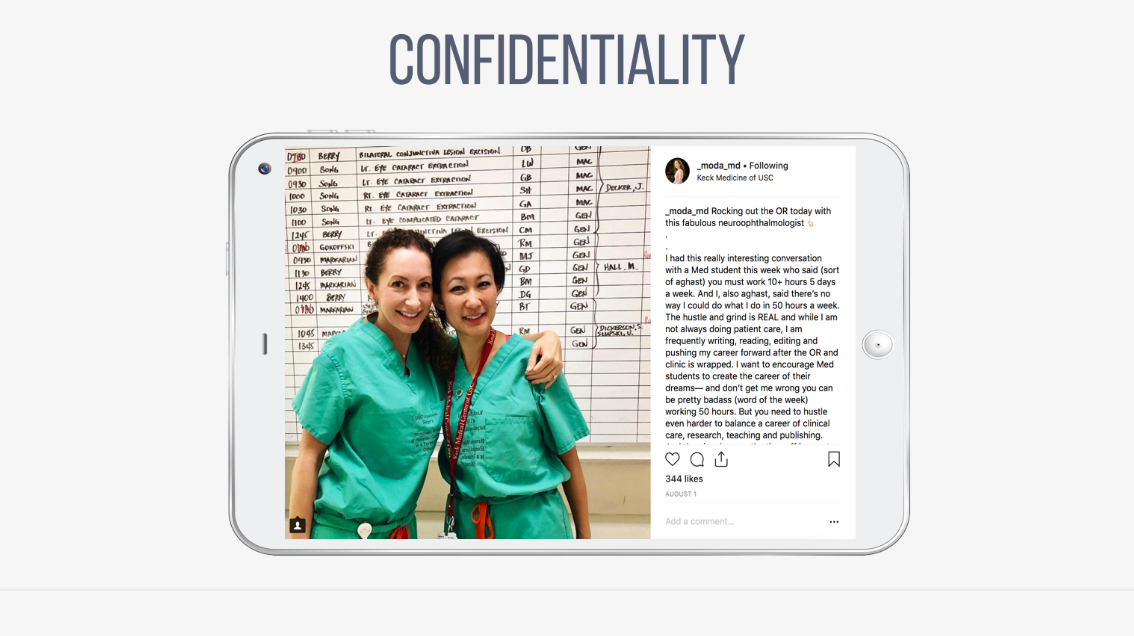 She’s posing here with one of her colleagues and it’s a fantastic post – the thing that’s a little bit risky, and I know that in Jesse’s circumstance she thought about this before posting, but for everyone that’s considering posting pictures from the operating room, you can see that in the background is a white board of the OR schedule for that day. There’s no patient information, there’s no medical record numbers, there’s no dates of birth, but it is the information from that schedule for the operating room that day. If you are going to post pictures from the operating room, be sure that you’re not posting anything whose background has identifiable information.

This is an example of a refractive surgeon (@StahlVision) that’s posing here with several of his patients who seemingly are happy and satisfied after successful refractive surgery. 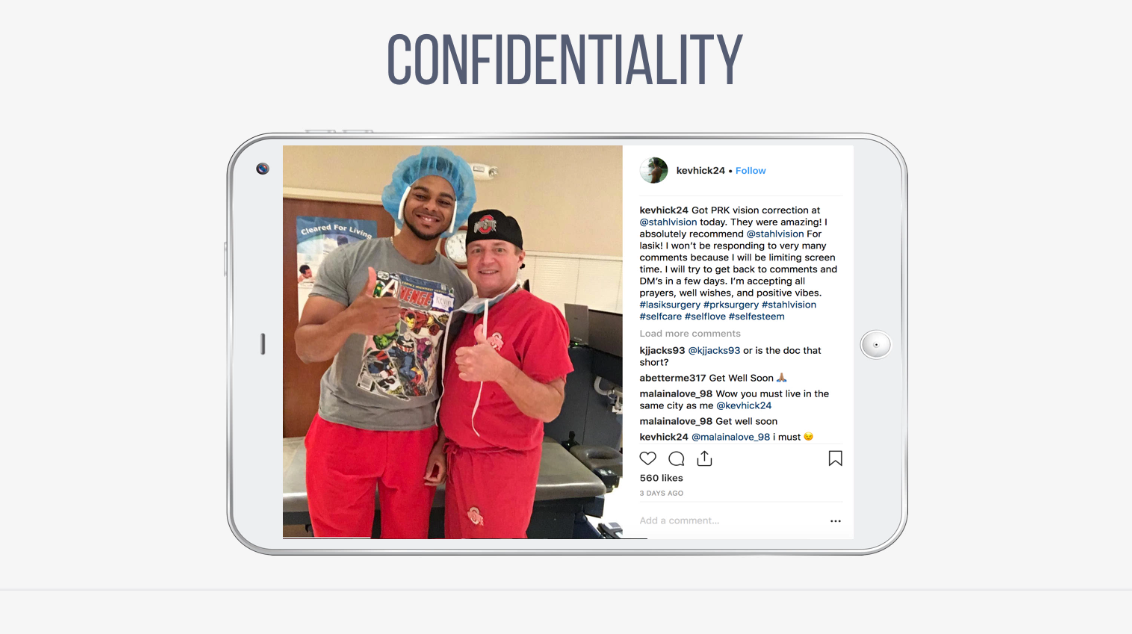 This is a great example of a post from the practice, and from this physician that he is posing with these patients – and this is okay, as long as those patients have given permission for these posts to be published. I trust, in this circumstance, that they have. Here is an example of the same physician, but maybe this is even a better example of how physicians can use social media. 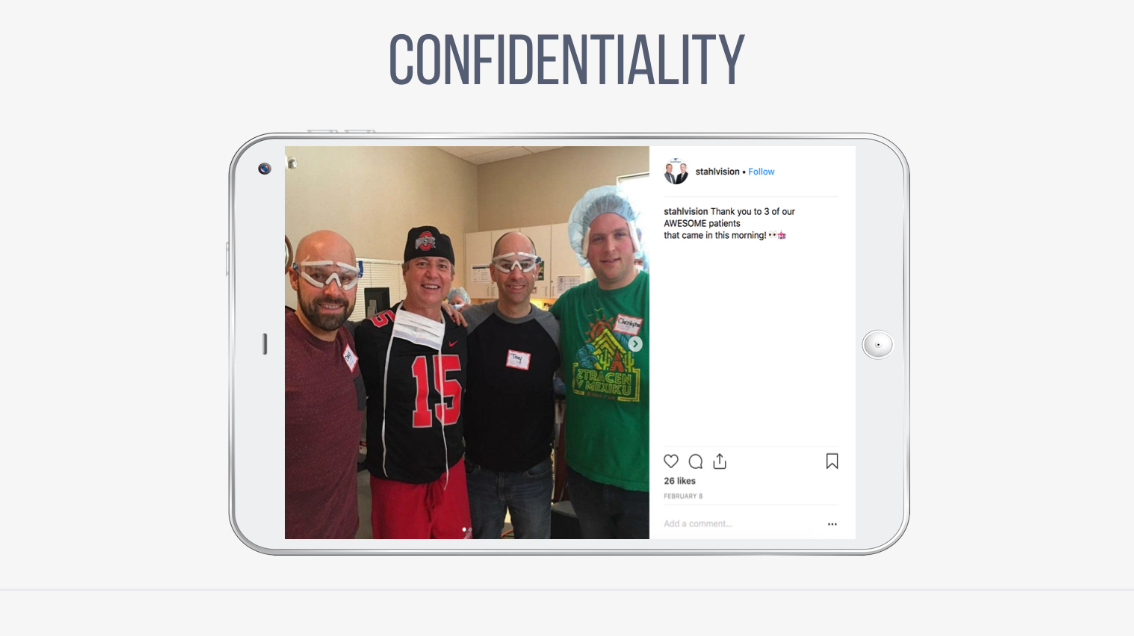 In this case, this is the patient’s Instagram profile that he is posting a picture with his surgeon. If a patient posts a photo with you as a doctor, you don’t need to worry about HIPAA because the patient is choosing to publish that on their own platform, and that’s perfectly ok.

Here’s an example from Usiwoma Abugo, MD, a wonderful oculoplastic surgeon (and friend) who has an incredible Instagram page at @mentormemd. This is an example of a ‘before’ and ‘after’ photo. 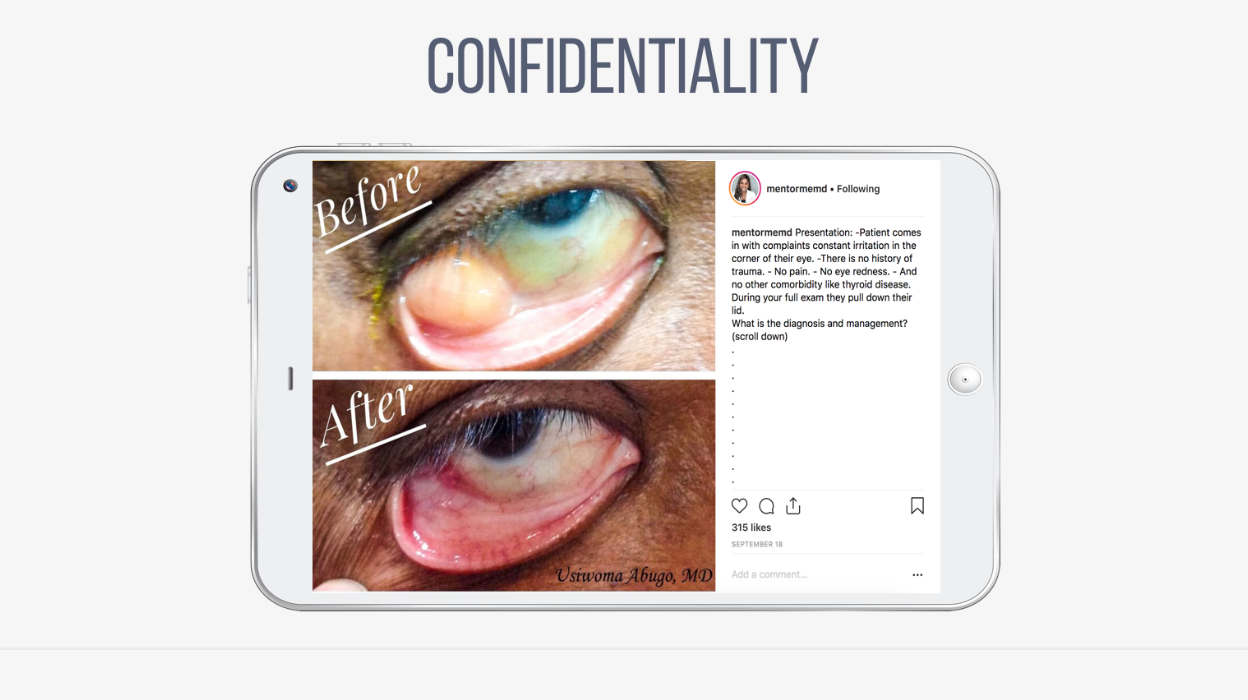 Now you may think, ‘Is this OK? or is this not OK?’ Well this is totally OK – this is not a full face photo which, by HIPAA standards, full face photos are not allowed, and, you can see that it’s just a ‘before’ and ‘after,’ of a surgery that she had performed. This is OK because it’s not identifiable, #1, and and then, #2, because it’s not a full face photo. Where physicians can get into a little bit of trouble in terms of posting pictures of things that are not of the full face, are if there is an accompanying characteristic of that photo that is identifiable. For example, if this patient had a very unique tattoo on their skin that was just next to their lateral canthus or next to this lesion which was removed, and that patient could then identify themselves or their family or friends could identify that this was their picture, based on that tattoo, then this would violate HIPAA. You just need to be careful. Is it identifiable or is it not? And if it’s not, it’s perfectly OK. 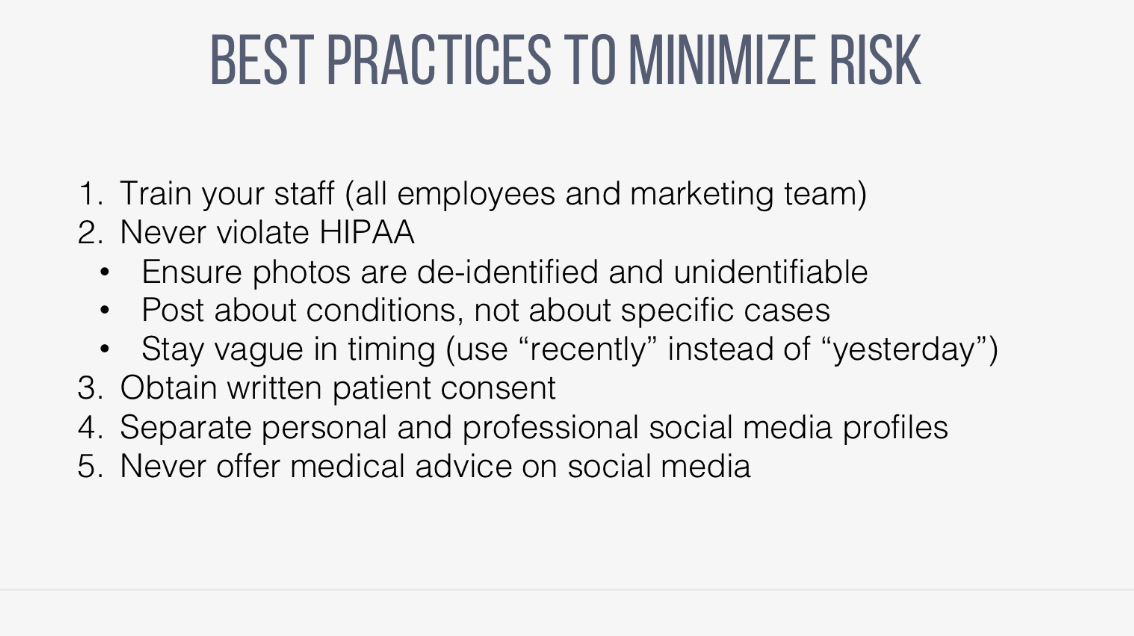 1. Train your staff – train all your employees – because those employees need to understand the dangers of using social media at work and posting things about work, and about patients. And then a separate training needs to be done with the marketing team to make sure that they know what is and isn’t OK in terms of posting content online.

2. Never violate HIPAA. We all know the HIPAA laws but we need to just be reminded about these when we’re starting to use social media professionally. Ensure that photos are de-identified and unidentifiable. Post about conditions and not about specific cases. Stay vague in the timing that you are mentioning in your post. Use the term “recently” instead of “yesterday.” For example, you could post “I recently did this surgery and here’s a video of the surgical procedure,” instead of saying, “Yesterday I did this surgery, and here’s a video” – because heaven-forbid there was a complication and then that patient could identify their complication as being from ‘yesterday’ based on the date in which it was published.

3. Obtain written patient consent, and that somewhat goes without saying.